Lithium-ion rechargeable batteries are charged and discharged by lithium ions traversing between the cathode/anode and the electrolyte. However, the performance of such batteries is degraded after repeated use, owing to by-products and degeneration. Nickel-manganese- cobalt oxide is one of the most widely used active material for cathodes in rechargeable batteries, and an electron microscope was used to determine its atomic arrangement before and after use. The results are shown in Fig. 1. The left-hand side shows the observation before the charge-discharge cycle test and a regular alternating pattern of metallic ions, represented by white blobs. After the experiment, on the other hand (right-hand side of Figure 1), it can be seen that the atomic arrangement has been altered. This is a phenomenon known as cation mixing, whereby the lithium ion and metallic ion are interchanged as the result of repeated charging and discharging. 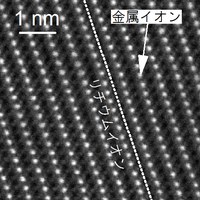 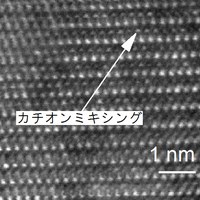 First-principles calculation was undertaken to investigate the effect of cation mixing on battery performance. The model used for this calculation is shown in Fig. 2. Figure 2(A) shows the normal model used for estimating the energy required for lithium ions to migrate inside the crystal during charging/discharging. Next, the energy required for misplaced lithium ions to return to the normal position was computed using the cation mixing model (Fig. 2(B)). The cathode is a complex structure with random placement of nickel, manganese, and cobalt atoms, so the K computer was used to execute the simulation (an HPCI project using approx. 1 million node-hours). For the computation, PHASE Ver.11[1] developed by Prof. Ono and others at the National Institute for Material Science was used. This program has been designed for efficient execution on the K computer, and has functions such as nudged elastic band method, molecular dynamics calculation, and lattice vibration calculation required for examining the issues with lithium-ion rechargeable batteries. The energy of lithium ion movement was calculated using this program.

As a result, the energy required for lithium ions to migrate in the normal model, as shown in Fig. 2(A), was estimated to be about 1 eV, whereas this was approximately 3 eV in the case of cation mixing (Fig. 2(B)). The difference in the magnitude of energy indicates that the cation mixing is one factor contributing to the capacity reduction[2].

As illustrated by this example, PHASE can be used to quantitatively evaluate the effect of change in atomic arrangement on the performance of lithium ion batteries. 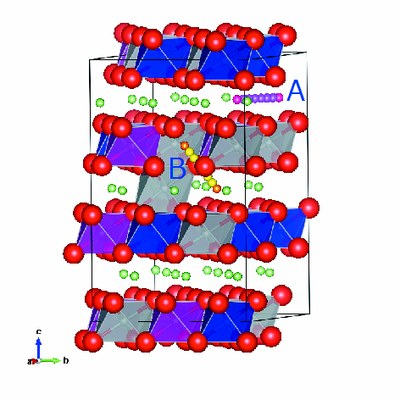 [1] PHASE is a program package for first-principles calculations based on the density functional theory, developed within the RISS project supported by MEXT of the Japanese government.
See the website Research and Development of Innovative Simulation Software,
URL: http://www.ciss.iis.u-tokyo.ac.jp/riss/english/