In this review, we will calculate the band of a typical semiconductor GaAs, and briefly explain how to write a band diagram. We have used the environment of MateriApps Live! ver. 3.3. The version of the Quantum ESPRESSO is 6.7. In writing this article, I referred to the following tutorial.

The calculation will be faster if you increase the number of CPUs as much as possible in advance in the setting of VirtualBox. Before launching MateriApps LIVE!, you can change the number of CPU processors by going to “Settings<System<Processors”. (Check the number of CPU cores on your PC and keep it the same. Normally you should set it to the maximum within the green bar on the CPU number selection screen.) Next, launch the terminal on MateriApps LIVE! (From Start Menu, “System Tools” > “LXTerminal”).

Next, download and extract the script files that was prepared in advance for easy execution.

To preform electronic state calculation, it is necessary to use an appropriate pseudopotential file for each atom. Pseudopotentials can be found and downloaded from this page. Here, for downloading, it is only necessary to type as follows:

To perform band calculation, execute the following command from the terminal.

The meaning of each command is as follows:

The calculation takes several minutes. When the calculation is completed successfully, the following band diagram should be displayed. 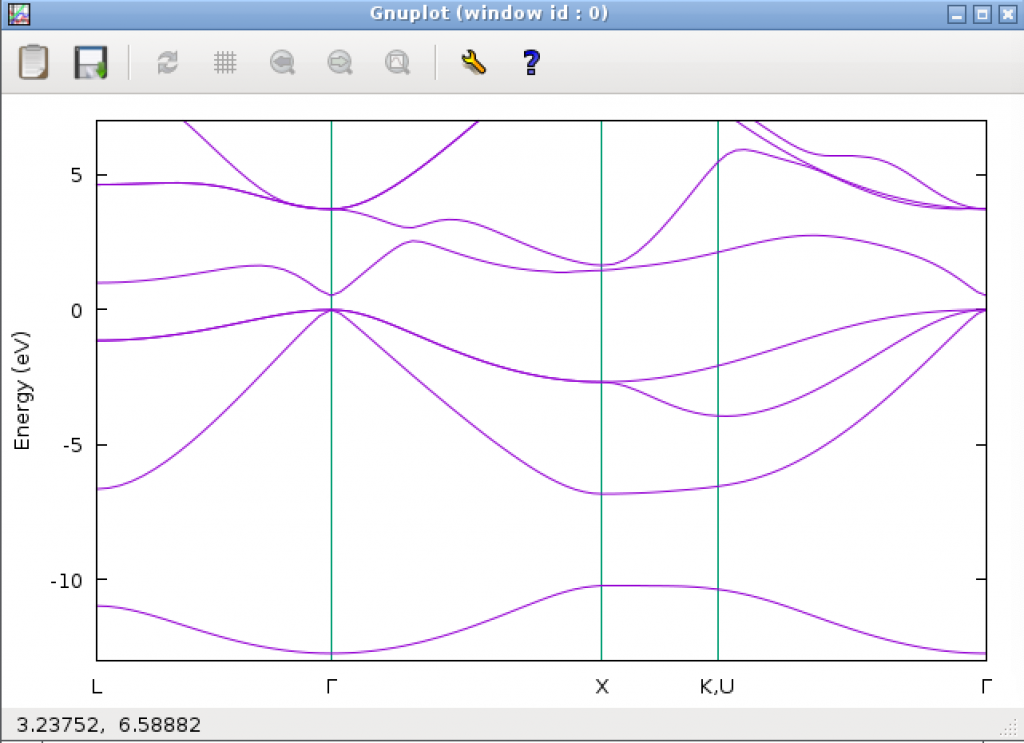 Let’s take a closer look at the contents of the input file (GaAs.scf.in) for self-consistent calculation. Let’s look at the first part.

From &control to / are grouped together, and between them parameters are set in the format of “parameter name = value”. The “calculation” parameter specifies the calculation mode. Here it is ‘scf’. This means self-consistent calculation (solving the Kohn-Sham equation self-consistently). The “prefix” parameter specifies the header for output files. It is a good idea to specify a material name. Here, it is ‘GaAs’. The “pseudo_dir” parameter is the location of the pseudopotential file. Now the pseudopotential files are located in the same working directory, so for now we’ll use ‘./’ (meaning the present working directory). The “twf_collect” parameter is an option to save the wave function.

This paragraph is a part that expresses the characteristics of the system. “ibrav” is a way to specify the Bravais lattice, and “ibrav = 2” specifies the unit cell vector of fcc. GaAs has the Zinc-Blende crystal structure, in which Ga and As are arranged in two sublattices of the diamond lattice. The unit lattice vector of the diamond lattice is the same as fcc. Let’s watch out. “celldm(1)” represents the lattice constant, “nat” represents the number of atoms in the unit cell, and “ntyp” represents the number of elements. “ecutwfc” and “ecutrho” are the cutoff energies (unit is Rydberg). Increasing the cutoff value, increases the accuracy, but makes the calculation heavier. The recommended value depends on the type of pseudopotential. Here we set the recommended value described at the beginning of the pseudopotential file.

This paragraph specifies the parameters for the convergence of the wave function. “conv_thr” is a parameter used for convergence judgment. “mixing_mode” and “mixing_beta” are parameters to speed up convergence, but for light calculations you do not have to worry too much. Please refer to official page for details.

This represents the internal coordinates (xyz coordinates) in the Ga and As unit cells.

In the last line, the parameter “nbnd” is added (the number of the bands to be plotted). The last k-point designation has been changed to

When the {crystal_b} option is specified, the k points on the four line segments connecting the five points (specified by the first number) in the reciprocal lattice space are drawn. Specify the start and end points of k points as the first three real numbers, and the number of divisions as the fourth.

The file GaAs.band.in used for post-processing is short.

If you pass this input file to the band.x program and execute it, a plot file bands.out.gnu for gnuplot will be generated. Using this data file, a band diagram is plotted by the plot.gp file.

Band calculation by Quantum ESPRESSO was introduced. If a material you hope to calculate is simple, you can draw a band diagram without much trouble. I hope that you can use it not only in research situations but also in classes at universities.

Since Quantum ESPRESSO 6.6, there was a change in the default parameters that causes the NCSF calculation to terminate abnormally without convergence. Change this review article so that we use the input files of version 20210520, in which ‘diago_david_ndim = 4’ has been added to the electrons section in GaAs.nscf.in.